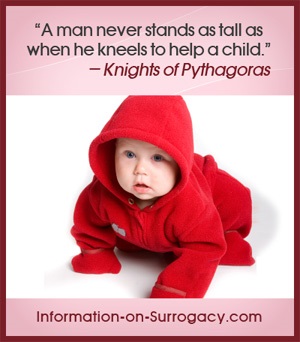 These surrogacy issues need to be discussed in advance of the surrogate pregnancy, and may be included in the commercial surrogacy contract, depending on the situation.

Please note: This site is not intended to be legal council. No portion of the ideas and concepts represented on this website should be used as a substitute for your surrogacy attorney’s advice. Make sure you consult your lawyer on all issues regarding surrogacy.

The issue of privacy is very important to discuss and place into the contract ahead of time.

Often privacy issues are not discussed simply because one party assumes the other party feels the same way.

These misunderstandings can cause great conflict in surrogate mothering.

Though it may seem like common sense, and not really a surrogacy issue, keeping names and personal information private while speaking online is a very important topic to discuss. Many, many surrogates and intended parents use the internet as a source of information and support. Many also document their journeys through online message boards, blogs, or websites.

While in some situations, both the intended parents and the surrogate mother are open about using their names and the names of the surrogate babies online, usually one or both parties feels that this type of behavior is dangerous, and would prefer their information be kept private.

The internet prides itself on its anonymity. Most people have some sort of screen name or nickname that they use instead of their own names.

For those who post online, a screen name for your intended mother, intended father, or surrogate mother would be more appropriate. Or, use a surrogacy abbreviation such as:

In some surrogate mothering situations, especially those that involve surrogates or intended parents who are vocal online and offline about their involvement in commercial surrogacy, they might be contacted for some sort of media coverage pertaining to their surrogacy.

This could be from any number of sources: TV, radio, newspaper, magazine, website, etc.

Before the surrogacy begins, in the contract phase, these privacy issues should be discussed.

About a decade ago, the newest pregnancy craze was videotaping the birth of one’s child.

Though not quite as prevalent today, it is something that is still very common.

Not everyone, however, is comfortable with videotaping the birth.

If the intended parents want to videotape the birth of their child, this should be discussed well in advance of the birth, preferably at the contract negotiation phase.

This is especially important if this would be a deal breaker for the intended parents if the surrogate mother would not want the birth taped.

It is not important to put a clause in the contract saying that videotaping will be done at the birth; remember, it would still be the surrogate’s decision in the delivery room, but more important to discuss this issue at this time, and possibly to put in the contract that it will NOT be done, if that is a concern.

There may be other privacy issues that pertain to each individual surrogate mothering arrangement.

Each situation, remember, is different.

I have heard of some intended mothers who do not desire that anyone knows they are completing their family via surrogacy.

Some even go so far as to wear a “baby belly” for the duration of their pregnancy while in public to convince friends and family that they are the one who is pregnant.

If this is your situation, then the most important thing to do is to be upfront with your surrogate in advance of the journey.

Many surrogates would feel uncomfortable with such a pretense, particularly if they move in the same social circles.

On the other hand, many other surrogates would not mind such a situation at all.