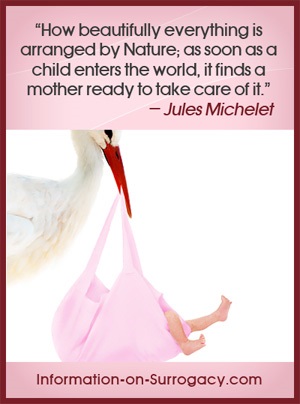 Surrogate doctor. The doctors and medical choices involved in a surrogate pregnancy are many, and need to be decided on in advance.

These surrogacy issues regarding DNA, HIPPA, and the choice of an OB/GYN should be resolved before signing a commercial surrogacy contract.

As you enter into a surrogacy arrangement, surrogate doctors should be discussed and placed into the contract.

For most, these issues will be very simple and easy to work through with the assistance of a surrogacy lawyer.

Much of it is standard in every contract, but unique circumstances might cause a surrogate mother or the intended parents to choose a different course of action.

The choice of an IVF clinic, in the case of gestational surrogacy, should be the intended parent’s decision alone. The surrogate mother generally has no say in the clinic choice.

After a surrogate is released from the IVF clinic, she will then go to see her own OB. This is usually quite early in the pregnancy. The following questions should be asked regarding surrogate doctors for the contract:

In some situations, the birth will be in a different state than the one the surrogate mother lives in. Often, neighboring states have more favorable surrogacy laws. In this situation, it needs to be clearly stated in the contract where the surrogate needs to give birth.

Alternately, if the surrogate resides in a surrogacy friendly state, the contract should specify that she is to remain residing in that state until the birth of the baby.

Most contracts have a page designed for surrogates to release her medical records, and information pertaining to the pregnancy, to the intended parents.

This gives the intended parents the ability to contact the surrogate doctor directly to get questions answered or just general information about the pregnancy itself.

Without this document, the intended parents would not be able to discuss anything with the surrogate’s doctor due to HIPPA regulations. HIPPA regulations are federal laws designed to protect the privacy of the patient.

After birth, it is common for intended parents to request a DNA test of the baby.

Some states require this for legal reasons, and even some insurance companies require it.

Though rare, it does happen sometimes that a surrogate inadvertently becomes pregnant with her own child instead of the intended parents’ baby.

This only happens if the surro is intimate with her partner against contractual and clinic regulations.

If this happens, the contract needs to clearly state what will happen.

These surrogacy issues do need to be brought up during the contract phase. No matter how uncomfortable.