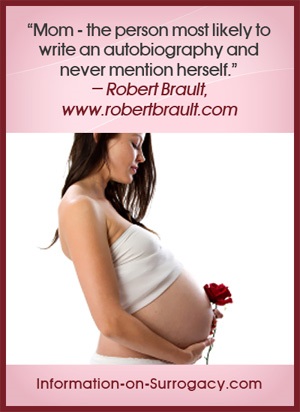 Surrogacy lawyers need to be obtained by both the surrogate mother and the intended parents in all arrangements. It is completely unsafe to proceed without an unbiased attorney for equal representation.

The biggest mistake most surrogate mothers make is not having their own surrogacy lawyers to represent them in the contract negotiations.

Sometimes these surrogates are uninformed that they should have equal representation, sometimes they are told it is not needed, and sometimes they waive their right to a surrogacy attorney because they like their intended parents and want to save them some money.

All Parties Must Have Separate Representation

If you are involved in a commercial surrogacy arrangement, you must have your own attorney.

The biggest mistake most surrogate mothers make is not having their own surrogacy lawyers to represent them in the contract negotiations.

Sometimes these surrogates are uninformed that they should have equal representation, sometimes they are told it is not needed, and sometimes they waive their right to an attorney because they like their intended parents and want to save them some money.

If you are involved in a surrogate mother arrangement, you must have your own attorney. A surrogacy lawyer (or any lawyer, actually) is paid to have their client’s best interests in mind.

Often, contracts made by one attorney and not examined by an impartial one, will be one sided, favoring only the contracted party, and leaving no room for the other parties’ rights. Usually, the intended parents are not trying to pull the wool over the surrogate mother’s eyes, but often that is exactly what happens when only their surrogacy attorney sees the contract.

Contracts are hard to navigate. They are filled with legalese and sentences with funny wording. Sometimes it is difficult to understand exactly what is being said, or agreed to in a certain section. Sometimes just a single word can alter the course of one’s life, negatively, forever.

The bottom line here is that a potential surrogate mother who does not have unbiased representation is putting her family at risk. The surrogate mother has more to lose in this situation than the intended parents do, and I’m not talking about the loss of her compensation.

When not worded properly, a surrogate mother could be left with unpaid medical bills totaling thousands (and possibly tens of thousands) of dollars.

She could inadvertently put her morals at risk by agreeing to let the intended parents decide if she will abort or selectively reduce a fetus. She could accidentally waive her right to the number of embryos that will be transferred to her body, increasing her chances of twins, triplets, quadruplets or more.

Or worse. I almost signed away my rights and put my family in an inconceivable situation:

Exceptions to the Rule

I know that there are many potential surrogate mothers who are reading this and thinking that there is no way that their intended parents would ever do anything to cause them harm.

After all, one should never proceed with a journey without getting to know, and getting to know quite well, their intended parents. If you trust them, and trust is so important in a surrogacy, then it’s OK to just have one attorney, right?

The only exception to the rule, in my opinion, is when an arrangement is taking place within the family.

If a sister is acting as a surrogate for her own brother or sister, or a mother is acting as a surrogate for her daughter or son, or perhaps one cousin is helping another cousin, then it is acceptable to only get one attorney. But for every other case, even if a surrogacy arrangement is between life-long friends, and the surrogate mother is not taking a fee of any sort, it is highly recommended that everyone has their own surrogacy lawyers.

I think especially in an existing friendship, it is important. It would be a shame for a friendship to end because something happens during the surrogate pregnancy that makes the surrogate feel as though she were taken advantage of (whether she was or was not). It is just safer for everyone involved if the all have their own surrogacy lawyers.

After giving birth to my first set of surrogate twins, the intended parents, my husband and myself decided to go through a second surrogacy as a sibling project. We did not go through an agency the second time, and even got rid of the escrow account. But I retained my lawyer the second journey, even though the contract was pretty much the same. Never enter into a commercial surrogacy agreement without surrogacy lawyers for all parties.

Representation vs. Going Over a Contract

One last think I’ll caution on: It is extremely common in the surrogacy community for an attorney to be acquired for the surrogate mother for the sole purpose of going over the contract.

This is usually fairly inexpensive. The idea here is that if everything looks good, there will not be a problem somewhere down the line.

But I would suggest that each surrogate mother finds an attorney that will not only assist with contract negotiation, but will also represent that surrogate for the length of her journey.

That way if a problem arises during or following a surrogacy, such as unpaid medical bills, her attorney will step in and take the legal steps necessary to fix the problem, at no additional cost to the surrogate mother.

Surrogacy lawyers who provide representation for a surrogate mother are usually 3-4 times as expensive.