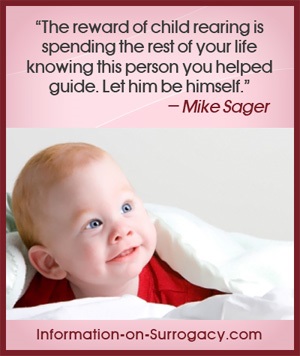 Surrogacy issues and arguments against surrogacy should be examined before a couple decides to find a surrogate mother. Join us as we discuss the last of a three part series on surro ethics: exploitation.

This is part three of our continuing discussion about surro ethics. Catch up on page one and page two before continuing.

Many who are against surrogacy feel that it is immoral, and it exploits the poor. Most of these common issues are just simple misconceptions.

The entire thought of a woman carrying a child for another woman and her husband sounds a little fishy. How does the surrogate mother get pregnant?

Is there something immoral or illicit going on between the surrogate mother and the intended father? As silly as this scenario sounds to those involved in the community, it is actually a common misconception, and one of the main arguments. Most people, regardless of age, profession, education level, or gender, think that some sort of affair is how surrogate mothers become impregnated.

The truth is, no, let me repeat no arrangement, involves sexual relations of any sort.

That’s not surrogacy; it’s swinging. Surrogate motherhood does not in any way, shape or form have anything to do with sex.

So this issue can be completely laid to rest. There are two forms of surrogacy, traditional and gestational.

No one is swapping partners or violating marriages in the next room.

It Exploits the Poor

Probably the most common of the issues revolving around ethics is the perceived exploitation of the poor. This scenario suggests that the “rich” intended parents barrage the “poor” surrogate mother with fistfuls of cash, swaying her financially to destroy her psyche.

Agencies, clinics, and attorneys will not work with women who are considered poor, or living at or below the poverty line. Why? Mainly to avoid the misconceptions of exploitation. Also, the money is never a guarantee; therefore any woman who is in desperate need of the compensation would not be well suited to be a surrogate mother.

The money gained by surrogates is often used to do such things as put a down payment on the family’s first home, or to help send their own children to college.

It may also help a surrogate mother to remain a stay at home mom, instead of rejoining the workforce.

The women who become surrogate mothers have many qualifications they must meet before pursing surrogacy.

Among them is the fact that a potential surrogate mother must have children of her own, which puts to rest the myth that a surrogate mother is being exploited because she does not understand the complexities of pregnancy and delivery.

Another qualification states that a potential surrogate is 21 years of age or older, meaning she is able to enter into a legally binding contract. Surrogate mothers are also provided with their choice of their own attorney, going over contracts with them in depth before commitment. They also have to go through psychological testing to be certain that they are of the correct mindset to be able to carry a child for nine months and then give him back to his parents.

Surrogate mothers are not being exploited in any way. They are generous, caring women by nature who are able to give another family the ultimate gift. Yes, they are being compensated in exchange for that gift, but not in a way that would be any sort of financial windfall, such as a lottery winning. At the end of the day it still comes down to a gift from the heart.

To Conclude the Ethics of Surrogacy

As with all aspects of life and especially those that cause controversy, surrogate motherhood is something that is difficult to understand from the outside.

Those who have never had the misfortune to experience the depths of infertility or the joy of being a surrogate mother cannot truly comprehend the process.

Criticism, hatefulness, and censure regarding these issues stem from simple ignorance.

For all those on the outside, I hope that these last few pages have gone a long way towards furthering your understanding that these issues are really non-issues.

For all those involved in a journey in one way or another, I hope these pages have given you some ways to counteract arguments against surrogacy you may encounter in your journey.

To all, best wishes.

Home > What is Surrogacy > Ethical Issues