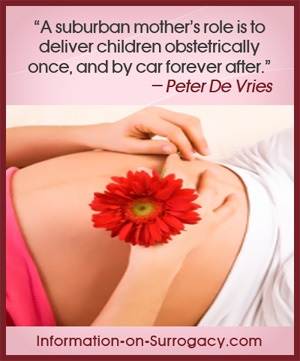 There are many ways that the public views surrogacy. The general population is ignorant about surrogate motherhood and some intended parents or surrogate moms who are vocal about their surrogate pregnancy may find themselves involved in one or more surrogacy debates with strangers against surrogacy.

Some surrogate mothers and intended parents choose to broadcast their surrogate motherhood journey to anyone who will listen. They wear t-shirts announcing their surrogacy, and are happy to explain to everyone they meet about the process they are going through to complete a family.

Other surrogate mothers and intended parents are afraid of, or have had negative experiences with random surrogacy debates, and prefer not to let others know that they are involved in surrogate motherhood.

For the most part, the public views surrogate pregnancy as a wonderful thing.

They feel that surrogate mothers have big hearts, and are generous people.

Often, a surrogate who chooses to let people know she is carrying a child for another couple will be met with praise and admiration.

Instead of engaging in surrogacy debates, most people will make statements such as, “Wow! You are such a special person!”

or “It takes a truly wonderful woman to be able to give such a tremendous gift.” or “I don’t know that I could do something like that. How remarkable.”

Intended parents are usually met with support and excitement. Oftentimes, a surrogate or intended parent who broadcasts their surrogate motherhood involvement will also come in contact with others who may be interested in becoming a surrogate mother, or even couples dealing with infertility who may be interested in exploring surrogacy as an option. It is a nice feeling to be able to point these people in the right direction to start their research on surrogacy.

Public Views: Surrogacy as an Occupation

Though most people are gracious and supportive of surrogacy, some people think that surrogate mothers are money-hungry women willing to do anything for a quick buck.

This portion of the public views surrogacy as something ugly, and money driven.

This unfortunate attitude and the resulting surrogacy debates are usually derived from simple ignorance.

Sometimes people will come right out and ask a surrogate mother how much she is “making” or “charging”. This sort of behavior is understandably quite rude, and often comes from complete strangers.

Most of the reason that surrogates are offended by the mere mention of money is that they are afraid of what the general population seems to think. They feel that the world will look down on them as if they are “selling their body” or “renting their womb”.

The public also has an unrealistic view on how much a surrogate actually gets paid, due to media inflating the truth.

See: The Truth About Compensation

It does happen that some surrogate mothers and intended parents encounter people in the general public who view the ethics of surrogacy as immoral, wrong, or going against God. This against surrogacy viewpoint is typically rare, though some people have reported being ostracized at their church because of it.

On a personal note, I belonged to a Southern Baptist Church during both my journeys and had nothing but support from my church. Everyone from my pastor and associate pastor down to the teachers in my children’s Sunday School classes were positive and caring. Not every church views surrogacy in a negative way; most do not.

Most of those who view surrogacy as immoral or wrong are simply ignorant about the process. They have no idea what actually happens in either traditional or gestational surrogacy, and are afraid of it. These people have never been faced with infertility and shattered dreams. They often make blanket statements such as, “Why don’t you just adopt? There are too many unwanted children in this country.”

Most surrogate mothers and intended parents will encounter negativity and surrogacy debates rarely from the general public. Despite what people are thinking, for the most part, most people remember their mothers teaching them that if they do not have something nice to say, they shouldn’t say anything at all.

In fact, surrogates and intended parents are most likely to encounter those against surrogacy either anonymously online, or in their own extended family relationships rather than from strangers. Parents, in-laws, aunts, and sisters are more likely to express prejudices and voice their opinions within the safety of family.

Most of the public views surrogate motherhood with ignorance and confusion.

The general population is very confused about surrogacy.

Most do not understand in-vitro fertilization, and don’t realize there is an alternative to traditional surrogacy.

Almost every single person will ask of a surrogate mother, “Is it hard to give up the baby?”

In addition to being confusing, surrogacy is fascinating to most people. Announcing to the world that you are involved in surrogacy is often somehow perceived as extending an invisible invitation to the masses to ask you any questions they have, no matter how personal, or to engage you in spirited surrogacy debates. Many will ask intelligent questions and will not understand the situation after it is explained to them.

Though some people involved in surrogate pregnancy prefer to remain anonymous, those of us who are open about our journeys are in the unique position to be able to help inform the public and change how the public views surrogate motherhood for the better. We just need to be prepared for surrogacy debates when they happen.