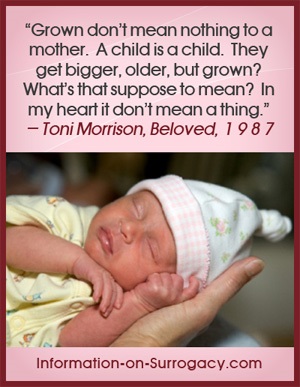 Surrogate pregnancy with multiples, that is twins, triplets, or more, is quite common.

Why do many involved in surrogate motherhood end up the proud parents of a brood of children?

What is it that makes commercial surrogacy so likely to produce multiple babies?

Many gestational surrogate mothers carry twins or triplets, especially those who have completed more than one journey.

There are two main reasons for the high probability of a surrogate pregnancy with multiples.

The very reason that a surrogate mother is chosen to assist a family, whether that be a traditional couple where the intended mother is unable to carry or a same-sex couple, is because she is healthy.

She has proven her fertility by successfully giving birth at least once prior, and has passed extensive testing to insure that her body is capable of handling surrogate motherhood.

Now we take that healthy woman, and we subject her to an infertility treatment designed to assist those having trouble conceiving.

Of course, a surrogate mother’s health is only half of the equation.

The other half is the number of embryos that are transferred into her womb. Commercial surrogacy, and in particular, IVF, is expensive.

Intended parents do not want to pay for an unsuccessful transfer, so are encouraged to transfer three, four, five, even six embryos into their surrogate.

The problem with this, is that the surrogate is healthy, and if the embryos are too, it could spell twins, or triplets, or more. It’s easy to get caught up in the excitement of the transfer, and the recommendations of the IVF doctor (who tries to maintain a high success rating) and not really think about what it means to transfer multiple embryos.

Every embryo transferred has the possibility of developing into a baby.

Every one. So if you transfer two embryos, you could have twins. Three, and you could get triplets. Four, quadruplets. Five or six? You get the idea.

Of course, twins and multiples are not guaranteed, nor is there a guarantee that any embryos transferred will survive, which is why so many are generally put in. But when they do survive, a surrogate mother and her intended parents have some hard decisions to make. Decisions which hopefully have been discussed ahead of time, regarding selective reduction in commercial surrogacy.

The best way to avoid the thought of selectively reducing one or more fetuses in order to give the remaining fetuses a better chance of survival is simply to limit the number of embryos transferred in the first place. See the following for more info on number of embryos and selective reduction.

Discussing Number of Embryos in a Contract

Discussing Selective Reduction in a Contract

What About Traditional Surrogacy?

Pregnancy with multiples is not nearly as common with traditional surrogacy as it is with gestational surrogacy, though it does occasionally happen, especially when the surrogate mother uses fertility drugs.

Otherwise, a traditional surrogacy is just a regular, run-of-the-mill pregnancy with the same chances of multiples as any other.