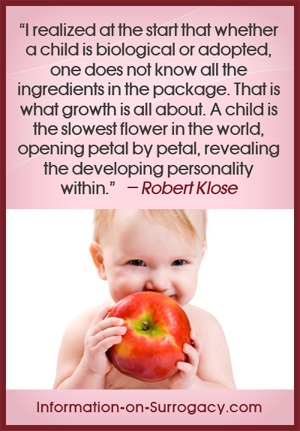 Reasons for miscarriage and chemical pregnancies are something that are often never identified. This, in itself, can be devastating for the intended parents and the surrogate.

However, my hope is to educate you on these two possibilities so that you will be better equipped to deal with them should they arise in your surrogate arrangement.

One thing that many people worry about when it comes to pregnancy (whether it is a traditional pregnancy or a surrogate pregnancy) is the possibility of a miscarriage. On this page, we will discuss the known reasons for miscarriage as well as discuss something called a chemical pregnancy.

This page is not designed to invoke fear; rather, it is designed to inform and educate. Though one always hopes to have a healthy pregnancy that results in a healthy baby, my goal is to provide awareness of the possibilities.

What is a Miscarriage?

A chemical pregnancy is one in which the miscarriage occurs not too longer after implantation. As a result the woman experiences bleeding right around the time that she would have been expecting her cycle, therefore, she may never even know that she had been pregnant.

The first thing I would like to say before we address some of the reasons for miscarriage is that in most cases, the reason is actually never established. It is not always a simple matter to pinpoint exactly what happened to trigger the miscarriage. But I will discuss some of the most common causes.

During the first trimester of pregnancy, the most common cause of a miscarriage is chromosomal abnormalities. These abnormalities usually occurred early in the conception process and most likely involve some type of damage to the egg or sperm cells involved or were the result of some error during the zygotic division process. This is a good place for me to mention the fact that in most cases there is nothing that you or the doctors can do to prevent or stop a miscarriage.

Some other common reasons for miscarriage include, but are not limited to:

Warning Signs of a Miscarriage

There are some signs that you might be experiencing a miscarriage. If you notice any or all of the following symptoms it is important that you contact your physician or a health care provider to undergo an evaluation.

Reducing the Risks of Miscarriage

As I mentioned earlier, in most cases the reasons for miscarriage involve chromosomal abnormalities, so there is typically nothing that can be done to stop a miscarriage from playing itself out. However, there are steps that you can take to reduce the risk factors:

Once you become pregnant, there are also things that you should do to remain healthy and keep your growing baby safe:

What is a Chemical Pregnancy?

Chemical pregnancy is a condition in which the miscarriage occurred before the formation of the gestational sac. In this condition a missed period or pregnancy test followed by a menstrual cycle is the only evidence of the pregnancy. It is considered a very early miscarriage. An ultrasound test cannot detect a chemical pregnancy, because the ultrasound looks for a gestational sac that is not there. This type of pregnancy lasts for less than 5 weeks.

Causes Of A Chemical Pregnancy

As with other miscarriages, the causes of a chemical pregnancy may never be identified because of how early into the pregnancy they occur. However, some of the likely causes include:

Warning Signs of a Chemical Pregnancy

The symptoms of a chemical pregnancy are usually not unique from the typical pregnancy symptoms because of how early they occur. Some symptoms include: irregular periods, a positive pregnancy test (or BETA test for surrogates) followed by a menstrual cycle, tenderness in the breast, nausea, fatigue, and morning sickness. These would all be accompanied by a menstrual cycle that may be heavier than usual and will likely also include severe cramps.

What happens to the surrogacy arrangement

You might be wondering “what happens to the surrogacy arrangement in the case of a miscarriage?” The answer actually varies depending on the individuals involved.

As is expected, a miscarriage can be a very emotional experience, which can make a working relationship between the intended parents and the surrogate very difficult or impossible. Everyone involved is likely to find themselves dealing with emotions such as disappointment, as sense of failure, sympathy, and guilt (on the part of the surrogate) and heartache, anger, and suspicion on the part of the intended parents. The intended parents may be heartbroken at not only the loss of the pregnancy but at the reminder of their own infertility struggles. They may blame the surrogate and wonder if one of the reasons for miscarriage is that she did something wrong. Again, it is important to realize that in most cases the reasons for miscarriage are at the chromosomal level. Usually there is nothing that could have been done to stop or prevent a pregnancy. It is natural to feel an array of emotions, but please do keep in mind that the surrogate mother was likely doing everything she could to ensure that the pregnancy was a healthy Unfortunately, sometimes things happen that are beyond our control.

What advice would you give a first time mother?