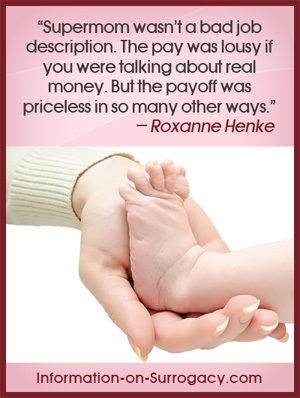 The ability to choose the state and/or country with the best laws pertaining to commercial surrogacy can be a very helpful thing in surrogate motherhood.

When many people typically think of surrogate motherhood, and the location of intended parents, they think of local arrangements between two close friends or family members. Most people think of local situations, where the intended mother comes with her surrogate to all doctor’s appointments and ultrasounds.

Most people don’t realize that commercial surrogacy is often conducted across state, and even national, lines.

Though it can be nice to have a local surrogate pregnancy arrangement, this type of situation is not best for all circumstances

A local surrogacy arrangement is best for surrogates and intended parents who wish to have a very hands-on surrogacy.

This situation works well for intended parents who:

For a surrogate looking for a very close relationship with her intended parents, and one who wants them to be involved in every part of the pregnancy, she should probably look for local intended parents.

Due to time and cost constraints, intended parents would probably try and make it to an ultrasound or two, and the birth, but would not be available for the majority of the regular doctor’s appointments.

Crossing state lines can be beneficial if the intended parents reside in a state where surrogacy is difficult or illegal.

This type of arrangement would work best for those who would like to be there for the important things, but not the majority of the pregnancy.

Some surrogate mothers choose to work with international intended parents, usually from European countries or Australia.

In this situation, the entire surrogate pregnancy is usually conducted in the United States (or the country where the surrogate lives).

Rarely will an American surrogate be asked to travel to a foreign country for any portion of the surrogacy, including the transfer and the birth.

In fact, if she is, it should set off immediate red flags.

International intended parents may seek an American surrogate because of the laws set up in America making surrogacy legal in many states. In many countries across the world, surrogacy is illegal.

They may also see American fertility clinics as a better choice than what they have locally.

In an international surrogacy arrangement, it is not uncommon for the intended parents and the surrogate to meet for the first time at the birth of the baby. This makes it difficult for most surrogate mothers, as many are looking to form a relationship before signing contracts and going through a transfer.

Some international arrangements are much like a long distance relationship, where the intended parents make as many trips as possible for appointments such as the transfer and any major ultrasounds, but sometimes that is simply impossible.

Also, due to distance, a close-knit, constant contact relationship after the birth of the child is impractical.

For those looking for a commercial surrogacy relationship that is very hands-off, or if a relationship after the birth is not a deciding factor, an international surrogacy might be a good option.

Home > What is Surrogacy > Location of Intended Parents