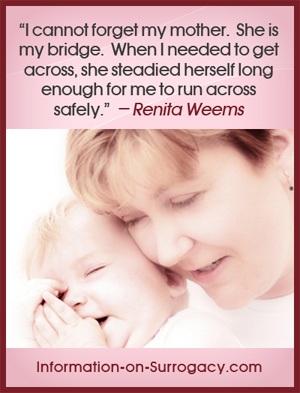 How surrogate mothers are paid varies from one commercial surrogacy contract to another.

There are several different methods of dealing with expenses in surrogacy and surrogate mother compensation.

Itemized expenses in surrogacy are generally paid at the time of, or the month following, the procedure.

Base compensation, however, is paid a little differently.

There are a few different ways in which surrogate mother compensation can be paid.

Most commercial surrogacy contracts allow that payments are made on a monthly basis.

Base payments are divided into 8 or 10 payments, and are paid once a month to surrogates starting the month following confirmation that she is pregnant.

Any fees owed to the surrogate at the time of birth are paid together within 30 days following the birth.

Many surrogates choose to divide the surrogate mother compensation payments into 10 equal, or mostly equal payments, since pregnancy is 40 weeks.

But there are a few reasons to recommend 8 payments instead of 10.

First, at conception, the surrogate is actually considered to be 2 weeks pregnant. With IVF, she could be more like 3 weeks pregnant.  That cuts the 10 months down to 9 months, 1 week.

By the time the pregnancy is confirmed, another month or more may have gone by.  That cuts the 9 months down to 8.

If a surrogate mother receives 8 equal payments, then she will be getting her last payment at the start of the last month of pregnancy. If 10 payments are made, 1 or 2 payments will remain until after birth. For these reasons, how surrogate mothers are paid makes much more sense with 8 payments, rather than 10.

Of course, each set of intended parents and surrogate mother needs to decide what is best for their situation, and place that method in their surrogacy agreement. If surrogate mother compensation payments cannot be equally divided into 8 or 10 months, then payments are made by rounded by the nearest $50 increment and the larger payments come at the end months of the journey.

How Surrogate Mothers are Paid: By Trimester

Some surrogacy compensation payments are made with 3 payments, once a trimester, for the entire pregnancy.

These payments usually get larger as time goes on.

Alternately, some arrangements choose to make payments at the beginning of the trimesters. The first payment is generally much smaller than the second and third.

How Surrogate Mothers are Paid: Lump Sum at Birth

A few contracts have the surrogate mother compensation as one lump sum payment after delivery. This is a very poor idea, and highly discouraged.

The unfortunate fact is that journeys can, and do go wrong. It has happened that surrogates with a lump sum payment are never paid.

Commercial surrogacy is a lengthy process. It would be very difficult to go through a year or more of this process without any compensation whatsoever.

A large deposit into a surrogate’s checking account could send red flags to Uncle Sam. Regardless of what a surrogate mother plans for income taxes, it could cause a lengthy and uncomfortable inquiry. In addition, some states, presented with such a large, single payment after the birth and relinquishment of a child, could wrongly see surrogacy as some sort of “baby-selling”.

Different arrangements have different terms as to how surrogate mothers are paid and when surrogacy compensation actually starts. Some are very vague, and say “at confirmation of pregnancy” while others are more specific.

Generally, two weeks after your transfer you will get a Beta blood test. Most clinics confirm you are pregnant after two beta tests, taken two days apart show that your beta numbers have doubled. This is generally the confirmation of pregnancy that is looked for in determining how surrogate mothers are paid.

Rise of Betas
As described above, this is where you have doubled your beta numbers with two tests in two days.

This test is blood work done at a lab.

Ultrasound
An ultrasound is generally taken at 7 to 9 weeks pregnant.

Since most non-surrogate, non-IVF pregnancies are confirmed with a simple urine test, and most outside of this situation do not receive a first ultrasound until they are 14+ weeks pregnant, yet they are confirmed pregnant, this can seem like an excessive way to determine pregnancy.

If the surrogate has delivered a full-term baby, she is entitled to any outstanding surrogate mother compensation fees following delivery. There are some instances, however, where she would not be entitled to outstanding fees.

Miscarriage
If a surrogate miscarries the baby, her compensation ends. She is generally entitled to a pro-rated fee for the month that the pregnancy was lost.

Abortion
The same holds true for abortion, if requested by the intended parents.

If a surrogate aborts a child without the intended parent’s permission, she may be legally required to pay back any compensation she has previously received.

More Info About Abortion in Contracts

Premature Birth
Many contracts state that a surrogate will be entitled to her full compensation so long as she delivers at or after a certain number of weeks.

This limit varies per contract. Some are as low as 30 or 32 weeks, while others as high as 35 or 36 weeks. Some contracts do not go over this at all.

If the surrogacy contract states that a surrogate mother is not entitled to her full compensation for delivering a premature baby, an average and acceptable limit is around 32 weeks. There should also be a clause stating that if twins or triplets are carried, then 28 weeks is more appropriate.

Stillborn
It is unfortunate, but occasionally a baby is born stillborn or passes away shortly after birth. This has no legal bearing on a surrogacy arrangement.

A stillborn birth at 39 weeks is still a birth, and as such, a surrogate is still legally entitled to her full compensation. In such a situation, however, many surrogates would go out of their way to refuse such compensation.