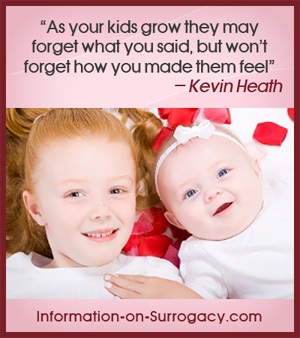 The history of surrogacy goes back to the dawn of time. But modern surrogate pregnancy got its big start in the late 1970’s. These surrogacy stories will fill you in on the most noteworthy accomplishments in surrogate motherhood.

Infertility is not a new problem experienced only by modern women. Women in all times leading up to ours have had trouble conceiving, and one way in which they were able to start a family was through the assistance of a surrogate mother.

These “old-fashioned” surrogate motherhood instances were most likely rarely (if ever) spoken about, and not documented.

The first documented case of surrogate pregnancy comes from the bible.

The story of Abraham and Sarah mentions that Sarah had experienced infertility, and asked her handmaiden, Hagar, to carry a child for her and Abraham.

Of course, Hagar was their slave, so I’m not really certain how much actual “asking” there was.

Since biblical times, there have probably been many such surrogate pregnancies, but it is not until the late 1970s that anything is recorded again. Here are a few facts about the modern history of surrogacy, with some great surrogacy stories as well.

The History of Surrogacy

1976: Keane Brokers First Surrogacy Agreement
In 1976, lawyer Noel Keane (of Baby M fame) brokered the first legal agreement between a set of intended parents and a traditional surrogate mother. The surrogate mother did not receive compensation for this.

Keane went on to create the Infertility Center, arranging hundreds of surrogate pregnancies per year. He was also involved in several high-profile cases and lawsuits over some of the arrangements made.

1978: First Test Tube Baby Born
On July 25, 1978, Louise Joy Brown was the first test-tube (aka IVF) baby born. While this was not a surrogate motherhood arrangement, this historic event paved the way towards gestational surrogacy in the future.

The procedure was carried out by Doctors Steptoe (of Oldham General Hospital) and Edwards (of Cambridge University) who had been actively working on this project since 1966. Lesley Brown, Louise’s mother, became the first woman (after more than 80 attempts) that successfully passed the first few weeks of pregnancy.

Leslie Brown had blocked fallopian tubes, and after 9 years of trying, she and husband John Brown decided to try this highly experimental procedure. Dr’s Steptoe and Edwards did something different with Lesley; instead of waiting 4-5 days to transfer the embryo, as they had done with previous attempts, they transferred it at just 2.5 days. It worked.

1980: First Paid Traditional Surrogacy Arrangement
In 1980, 37-year old Elizabeth Kane (a pseudonym), made the history of surrogacy by giving birth as a traditional surrogate mother to a son. She made history as the first documented surrogacy arrangement that was compensated. Ms. Kane received $10,000 for the successful delivery of her baby.

Kane was a good candidate for traditional surrogacy because in addition to her having children of her own, she had also, prior to her marriage, given a child up for adoption. None-the-less, Kane was completely unprepared for her feelings surrounding the birth of the surrogate baby, and though she experienced no trouble dissolving her parental rights at birth, she came to regret her decision to become a surrogate mother.

Elizabeth Kane became an advocate against surrogacy, speaking out in the famous Baby M case. She chronicled her experiences in a book titled Birth Mother. In addition to the emotional difficulties she experienced, Kane’s children experienced teasing and emotional distress, the family’s social positions suffered, and her husband experienced difficulties in his career.

1983: First Successful Pregnancy via Egg Donation
In 1983, a menopausal woman at Monash University in Melbourne, Australia became the first mother to give birth to a baby using donated eggs. Though again, not a surrogate pregnancy, this remarkable event made gestational surrogacy possible.

1985: First Gestational Surrogacy
The first gestational surrogate pregnancy took place in 1985, a monumental moment in the history of surrogacy. The surrogate carried the biological child of a woman who had had a hysterectomy, but had retained her ovaries.

Upon the birth of her child, Mary Beth decided she wanted to keep the baby.

What followed was a two year legal battle with Melissa’s biological father, Bill Stern, and intended mother, Betsy Stern, over custody, which finally ended in the Sterns getting custody, and Mary Beth getting visitation.

1988: Patty Nowakowski Gets Custody of Surrogate Twins
In 1988, Patty Nowakowski gave birth to boy/girl twins as a traditional surrogate mother. Upon their birth, the intended parents told Patty that they did not want a boy, only a girl, so they left their newborn son with her in the hospital. Patty, who had entered into surrogate motherhood with no intention of ever having another child herself, was suddenly left with the prospect of raising an unexpected child.

Patty and her husband eventually decided not only to raise her biological son, but also to seek custody of the twin daughter the intended parents chose as though they were picking a puppy from a litter. After a custody battle, they kept both children.

History of Surrogacy: How Many Babies?
The first documented surrogate pregnancy was recorded in 1976. From that moment until 1988, approximately 600 babies were born via surrogacy. Between 1988 and 1992, that number rose significantly, to over 5,000 births.

The amount of babies born from surrogates in the United States has continued to rise throughout the last two decades, with thousands of babies born every year.

Recently in the History of Surrogacy

2001: Oldest Surrogate Mother
In 2001, a grandmother, Viv, became the world’s oldest surrogate mother, giving birth to her own grandchild. That record has since been broken.

2005: Surrogate Mom Gives Birth to Quintuplets
On April 26, 2005, 54 year old Teresa Anderson delivered five boys as a gestational surrogate mother to a couple she met online. The intended mother, Luisa Gonzalez, and her husband had battled infertility for over 10 years.

When she found out she was carrying quintuplets, Teresa waived her $15,000 compensation, feeling that the intended parents would need it more than she to raise their boys.

2007: Oldest Surrogate Mother to Twins
In August 2007, 58 year old Ann Stopler gave birth to her twin granddaughters. Her daughter, Caryn Chomsky, was unable to conceive due to cervical cancer.

2008: Oldest Surrogate Mother to Triplets
In 2008, 56 year old Jaci Dalenberg became the oldest woman ever to give birth to triplets. She acted as a gestational surrogate mother for her daughter Kim, and delivered her own grandchildren.

2008: Oldest Surrogate Mother in Japan
The oldest surrogate mother in Japan gave birth to her own grandchild in 2008 at 61 years old. Her daughter had no uterus, but doctors were still able to use her eggs. Surrogacy is generally frowned upon in Japan, but this unusual case made headlines.

Surrogate motherhood has come a long way in the history of surrogacy. From rarely spoken of traditional surrogacies of centuries past, to family members acting as surrogate carriers and commercial surrogacy of today, the road has been long, and many miracles and hardships have been faced along the way. It will be interesting to see what will happen to the history of surrogacy in the next 20, 50 or 100 years.

Home > What is Surrogacy > History of Surrogacy