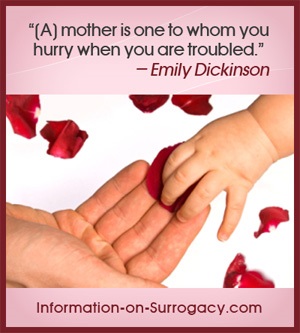 In gestational surrogacy, as opposed to traditional surrogacy, surrogate mothers are required to go through an extensive medical protocol in preparation of an embryo transfer, as well as to sustain any surrogate pregnancy that is achieved.

Basically, what this means is that gestational surrogates are required to have daily injections of medication that they or their partner gives them at home.

Every day. For several weeks.

This is pretty much mandatory in gestational surrogacy.

If this intimidates you, know that many surrogate mothers have been there before.

Personally, I hate needles and would have laughed if anyone had told me a decade ago that I would push a 2-inch long needle into my rump on a daily basis in order to help someone else become a parent. Yet that’s just what I have done. Four times.

Gestational Surrogacy Medications: Why They are Needed

Most people do not realize the complex scientific protocol that is required for an IVF embryo transfer. I suppose those not familiar just assume that the woman goes to the reproductive endocrinologist, an embryo is “somehow” implanted into her uterus, and the rest is history. The general public does not comprehend the fascinating and precisely operated process it truly is.

A surrogate mother’s body is prepared, via gestational surrogacy medications, to represent the ideal time for her body to conceive.

This is done through various hormones the surrogate mother will take orally, vaginally, or through injections.

The gestational surrogacy medications have three purposes, each at different times in a surrogacy journey.

During a fresh embryo transfer, the eggs are retrieved from the intended mother (or an egg donor) and are fertilized in the lab, then implanted into the surrogate mother 3-5 days later. Gestational surrogacy medications are used to make sure that the cycles of both women are the same so that the surrogate’s body is ready to receive the embryos. If the surrogate were in a different cycle, her body would most likely reject the embryos.

The lining of the uterus needs to be of an optimal thickness in order for the embryos to properly adhere. The reproductive endocrinologist will monitor the surrogate’s lining via ultrasound and blood tests. A series of estradiol injections are given prior to transfer to prepare the lining to make it the same as if a natural pregnancy were to occur.

After the transfer, a surrogate mother will be placed on hormones to simulate pregnancy. I’ve always explained it to those outside the surrogacy and IVF community as shots that I take daily to “convince my body that it is pregnant”.

The following are the most common types of medications used. Keep in mind that each clinic is different, and might prescribe a different medical protocol.

The main purpose of birth control pills is to regulate a surrogate’s menstrual cycle and to make it easier to sync her cycle with the intended mother’s, or that of an egg donor if one is used.

Using birth control pills, a clinic is able to medically control when the surrogate will have her period, and is able to stop and start her cycle in order to conform to the other woman’s.

GnRH-a is an acronym for gonadotropin-releasing hormone agonist. The most popular brand name for this medication is Lupron. Lupron injections are nearly always used for a fresh transfer, and may or may not be used for a frozen embryo transfer.

Lupron injections are synthetic hormones designed to temporarily suppress a surrogate’s cycle, and they are done primarily to get her in sync with the egg donor or intended mother.

Lupron injections are injected subcutaneously via a small needle, resembling a diabetic insulin needle. The surrogate will need to do the Lupron injections herself, at home, daily for a period of a few days to a few weeks, depending on the clinic’s protocol. The injections will be made in the fatty area of her stomach, just to the right or left of her belly button.

How to Give an Injection

The main purpose of estradiol is to stimulate the development of the endrometrium, the lining of the uterus. Estradiol is started in a surrogate when the egg donor or intended mother starts her stimming medication.

Estradiol can be in pill form, patch form, or given as an intramuscular injection. The injection will be given by the surrogate (or her spouse) to herself, most likely twice per week. After the transfer, estradiol is often continued through the first trimester.

Progesterone in oil is started in the surrogate the day of the egg retrieval. This releases hormones to cause the embryo to implant. A progesterone injection is then continued, daily, throughout the first trimester.

How to Give an Injection

Gestational Surrogacy Medications: How Many Shots?

There are a lot of them.

This will vary, of course, by each clinic’s protocol.

The injections may seem intimidating, and that first self-injection will probably require a bit of time for rehearsal, but honestly, a surrogate mother gets used to the injections. The thought that the baby or babies she is carrying depend on those medications to survive has a way of strengthening her resolve.