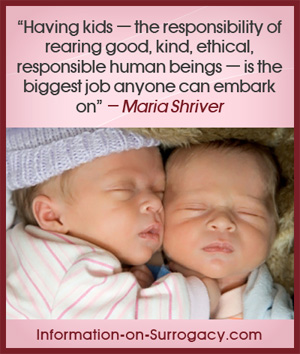 There are two types of surrogacy arrangements:

Unlike traditional surrogacy, a gestational surrogate mother is in no way biologically related to the baby or babies she carries. She is merely the carrier of someone else’s biological child.

This form of arrangement is becoming increasingly popular, as advances in the success rates of IVF grow. Now it is not only possible, but quite feasible that an infertile couple is able to still have their own biological children. Sometimes, a gestational carier and an egg donor will be used together, instead of a traditional surrogate.

This form of commercial surrogacy also has the most laws that favor it, as the states in the United States that recognize this process recognize the intended parents as the legal parents of the child, making it impossible for a surro to suddenly “change her mind” at birth.

How to Become a Gestational Surrogate Mother

These qualifications range from medical and mental qualifications, to those based on family support. Go over the following before you start looking for intended parents or a potential surrogate.

You want to be informed of how the process works ahead of time. Also, be sure and check out the Getting Started Checklist.

One of the biggest sources of curiosity in the community is compensation. Yes, gestational surrogates are compensated. The amounts, however, vary completely from one arrangement to another, and are probably not as high as rumor has it. It is important to note here that women that become surros do not do so just for the money (though that does play a big factor).

Surrogacy is a long and emotional road, filled with sacrifice on everyone’s part. Money alone cannot be the motivating factor on deciding to become a surrogate mother.

The biggest thing that sets gestational surrogates apart from their traditional counterparts is the use of medical science to achieve and maintain the pregnancy. This involves the use of medications: oral, suppository, and injections, on a daily basis.

The strict medical protocol is not for everyone; make sure you understand what is required if you are still considering surrogacy. Many potential surros decide it is not for them after they fully understand the procedures below.