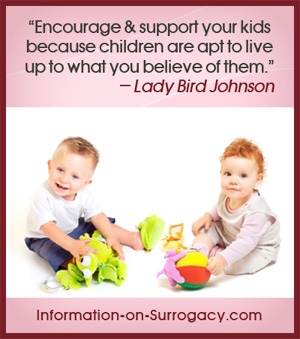 Examine the ethics of surrogacy, the opposing viewpoints of surrogate parenthood in this series of articles. What are common ethical issues of surrogacy? Is surrogacy right? Read part one, discussing the very idea of science babies, and the reasons why it is felt that infertile couples should adopt.

We have entered a new age. Now it is scientifically possible for a baby to be created in a petri dish from the sperm of a man and the eggs of a woman, and the resulting embryos can be transferred into a second woman to gestate.

Through the use of fertility drugs and careful monitoring, these embryos can grow to full term babies, which are then given back to the persons who commissioned the process, which are not necessarily those who originally donated the eggs and sperm for the event.

So I ask you, is surrogacy right?

We know this scientifical procedure is more than possible; in fact, it’s quite common.

But is surrogacy right? What are the ethics of surrogacy?

Let’s examine the common complaints, issues, and ethics of surrogacy. We’ll find out the opposing viewpoints of surrogate parenting.

This topic continues on a second and third page.

The entire idea of a child created in a test tube and carried by an unrelated woman is enough to drive fear into the hearts of many while questioning the ethics of surrogacy. The very thought conjures up visions of science fiction movies gone bad, or thoughts of the privileged few genetically creating the perfect child. Is surrogacy right?

It is true that reproductive scientists are able to accurately tell if a created embryo might carry a specific disease, or even to tell it’s gender. Soon we may have the technology to determine hair and eye color, or even skills or hobbies of our potential children. We may see in our lifetimes that scientists are able to successfully clone a human being.

But we are not talking about science fiction here, or extreme reproductive selection, with the ethics of surrogacy. We are simply talking about a woman and a man who are unable to carry their own children. We are talking about helping regular people become parents, not have a super-child created with super-genes.

Once upon a time, organ transplant was considered science fiction. Now it is commonplace, so commonplace that one is asked to designate on their driver’s license if they would like to donate their organs at death. Do we examine the ethics of those decisions?

Surrogacy is similar to organ donation, except it is more like organ borrowing. One woman assists another woman, through scientific and medical means, to carry and birth her child. It’s as simple as that. Is surrogacy right? You tell me.

Opposing viewpoints of surrogate parenthood argue, with all the unfortunate babies being born today in this world, isn’t it the duty of the infertile couples out there to adopt them, instead of bringing more children, science babies at that, into this already overcrowded and difficult world?

There are several reasons why an infertile couple may choose surrogacy over adoption. Often, there simply isn’t a choice.

In order to adopt a child in the United States, intended parents must jump through enormous hoops. There are interviews with social workers, home studies, and a long list of requirements. One of those requirements, in most situations, is age. This means that older intended parents are less likely to be given the approval to adopt.

Infertility is commonly diagnosed in the late 30’s to early 40’s. So an intended mother, who is say, 38 when she tries to begin a family, and spends the next five years seeking treatment might be 43 by the time she has come to the point where adoption is a serious option. At that point, she is interviewed by an adoption agency and told that there is a 5 year waiting list. This puts her too old to be able to adopt, according to the rules and regulations in her area.

Unlike in surrogacy, adoptive mothers have legal rights.

In most cases, they have the ability to change their minds after they give birth and decide to keep the baby.

This does not happen in surrogacy.

A set of intended parents can become attached to an adoptive mother and baby, spending months of their time with her, going to doctor’s appointments in some cases, paying for her cost of living, decorating a nursery for the upcoming birth, having a baby shower, watching the birth of their supposed child only to have the mother decide at the last minute that she doesn’t want to put the baby up for adoption.

And yet another year goes by for the intended parents, who are asking themselves, “Is surrogacy right?”, while deciding the ethics of surrogacy.

Adoptive parents often pay for the medical and living expenses of the biological mother who “may” be giving up her baby to them.

They also pay the legal fees.

These collective fees are paid even if the biological mother ends up keeping the baby.

Add in a failed adoption or two and the costs are completely in line with a typical surrogacy. So those arguments against surrogacy but for adoption who say that surrogacy is more expensive are not correct. Just uninformed.

Who made the rule that if your body didn’t function properly you were required to adopt? Did God stamp these people on the forehead and say “Thou shall adopt.”? No.

The truth is, not everyone wants to adopt. And adoption should be a choice, not something someone is forced to do. Some people simply do not want to inherit a baby with genes and from a set of circumstances so different from their own. There is absolutely nothing wrong with this. This is not one of the ethical issues of surrogacy at all.

Those critics of surrogacy who sit on a fence and cry “Adopt! Adopt!” really need to look at themselves. With this sort of mentality, they themselves should not burden the world with their own biological children, whether they are able to conceive naturally or not. The people who feel there are too many children in this world to bring more into it are the ones whose true duty it is to adopt those less fortunate.

Home > What is Surrogacy > Ethics of Surrogacy