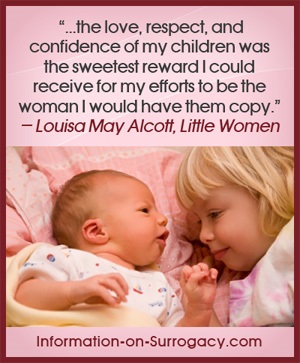 Altruistic surrogacy has started to become a buzz word from two groups of people: those on the outside looking at surrogate motherhood as a commercial enterprise, and those who are in need of a surro but cannot afford one. Are there women out there willing to become a surromom without taking a fee?

Let’s get to the bottom of what exactly altruistic surrogacy is, as well as where to find such a surrogate. The word altruistic is an adjective derived from the word altruism. Altruism is defined by the American Heritage Dictionary as follows:

I find it particularly interesting that the zoological definition has to do with reproduction.

Altruistic surrogacy is where a surrogate mother agrees to gestate a child for intended parents without being compensated monetarily in any way. In other words, this is in effect a free surrogacy.

Now, all the surrogate pregnancy related expenses, such as health insurance, maternity clothes and prenatal vitamins are still paid by the intended parents, but the surrogate mother herself does not take a fee in any way.

Either a traditional or a gestational arrangement may be termed altruistic. As an intended parent reading this, you might think this sounds too good to be true. And, you’d probably be right. Let’s examine why this sort of surrogate motherhood agreement is extremely uncommon.

All Surrogates are Altruistic

First off, let’s make one thing clear. Although most journeys are not classified as altruistic surrogacy by the definition of the term, ALL surrogate mothers are altruistic. Despite the fact that most surrogates take a fee of some sort, the very existence of a surrogate mother credits her selflessness and generosity.

These women who choose surrogate motherhood have a very giving heart, and sacrifice much (even if they are compensated) to assist another couple in bringing a child (or children) into the world. Those that choose surrogacy are not out to make a quick buck (and those that are do not last long).

Why Not Many Surrogacies are Altruistic Surrogacy

For those not intimately involved in the process in one way or another, this may seem like a rather obvious question. If all surrogates are so generous, then why on earth do they charge a fee?

Well, truthfully, there’s just a lot more to it than meets the eye. Any woman who has ever been pregnant before understands the physical constraints on a mother’s body. But surrogate motherhood goes so much further than that.

Though we consider pregnancy completely safe in this day-and-age, the truth is, women still die from pregnancy related complications in this country every year. There are risks. A surrogate mother may unexpectedly need a c-section. I myself hemorrhaged and needed a blood transfusion.

In addition, a surrogate mother may lose her reproductive abilities, putting her in the same category of infertility as her intended mother.

A surrogate pregnancy can be extremely stressful for both the intended parents and the surrogate mother and her husband. I have seen marriages come to an end because of surrogacy.

Having to share on a daily basis all the details of this very intimate process with another couple, details you would only usually share with your spouse, can be very draining. It is a unique situation with unparalleled challenges.

There are a host of inconveniences that go along with surrogate motherhood. Things like not being able to pick up your own child, refraining from sexual relations for more than three months, and not drinking alcohol are some of them.

Most people do not understand the amount of sacrifice that really goes into surrogate pregnancy. For instance, because of various surrogacy laws, surrogates need to give birth in a specific state. This can mean that she is unable to travel via plane to her relatives home for the holidays, or that she might need to pass on a vacation with friends.

This can also mean that if something devastating were to happen, such as her own mother were to fall ill, or worse, pass away, she would be contractually unable to travel to her bedside for fear she would go into labor in an unfriendly surrogacy state.

And what about promotions? My own husband had to pass on a promotion opportunity that occurred during our first surrogacy. He turned down a better job, with better hours, much higher pay (ironically, more than I was getting to be a surrogate mother), simply because we needed to stay in the state we were contracted in.

All these things are what makes surrogacy by very nature altruistic. A surrogate’s family sacrifices and goes to unbelievable lengths to give to the intended parents and their family. The fees a surrogate takes are paltry in comparison.

The truth is, though most surrogate mothers would love to do an altruistic surrogacy, it simply isn’t practical. And it honestly isn’t fair, to her or her family, to put them through such a situation without some sort of compensation, in most situations.

Where to Find an Altruistic Surrogate Mother

Though there are some women who wake up one day and suddenly decide to become a surrogate mother without taking a fee, they are few and far between. This is the equivalent of someone who donates a kidney to a complete stranger. It happens, but you do not hear about it often.

And just like a donated kidney, the best and most likely place to find a woman willing to be an altruistic surrogate is within your own immediate family or circle of close friends. A mother, a sister, a cousin, these are the people who would not only be the most willing to help achieve a surrogate pregnancy, but who would feel compelled to do it for free.

The main of the disadvantages of surrogacy is the sheer cost of the entire process. There are many, many surrogates out there who take a low fee, some low enough to almost be considered an altruistic surrogacy. If money is an issue, these women should be sought out using some of the ways to find an independent surrogacy match.

There would be no altruistic surrogacy arrangements through an agency of any sort.

Would you ever consider becoming a surrogate mother without accepting a fee?

Home > What is Surrogacy > Altruistic Surrogacy