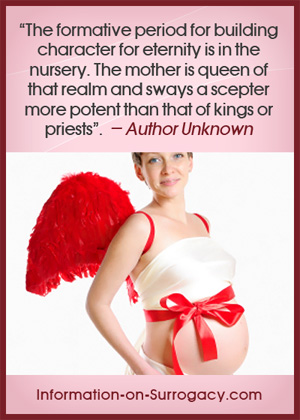 Mother’s Day is a nationally recognized and globally celebrated holiday which focuses on celebrating mothers and motherhood. It also celebrates maternal bonds and the significant impact that mothers have in our world. This year the holiday falls on May 12th in the U.S. so it is quickly approaching. A lot of people debate whether or not pregnant women who have not yet physically had children should be included in the celebrations. Some would say that they should be because you become a mother as soon as you become pregnant. Others would disagree, saying that you are not a mother until your child arrives.

I recently saw this very question being debated on Facebook and it made me wonder “how is Mother’s Day addressed in surrogacy situations?” When a surrogate mother is pregnant, her friends and family are sure to know that the child she is carrying is not her own and that the child will be going to live with the intended family as soon as it is born. So are they expected to extend the same holiday greetings to her? When it comes to the intended parents, what is the general consensus about their celebration of the holiday. Do people feel the need to wish the intended mother a Happy Mother’s Day since she is expecting? Do the intended parents acknowledge the day by sending a gift to the woman that is carrying their child?

Then I wondered about how most surrogate mothers feel about the holiday after they have already given birth and the child is with their intended families. Although it would certainly be nice to hear from my intended families on that day, since I am indeed a mother to my own children I realize that the children that I carried for them are not mine, so I don’t expect to anything on Mother’s Day. However, is this the general consensus. Do other surrogate mother’s feel the same way or are there those who actually wish to hear from their intended families on Mother’s Day?

Being a surrogate mother is definitely an act of sacrifice , just as a traditional pregnancy is. Physically and emotionally you experience much of the same things. So should there be some formal recognition of the surrogate mother’s actions on a continued basis? Or is it best to avoid establishing the surrogate mother as playing the mother role in any way? What do you think? If you are or have been a surrogate mother, do you expect to hear from your intended family on Mother’s Day?