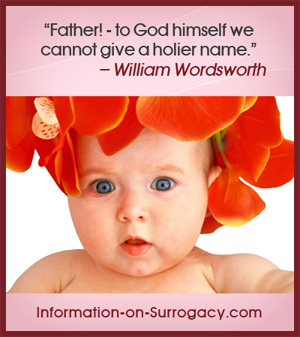 Hello, my cousin has asked me to be a surrogate for her. However, I’ve never had any children of my own and am wondering if it would be possible for me to have a multiple pregnancy (one from her egg and husbands sperm and one from my own egg and husband’s sperm). Thank you.

Reply by Rayven
You do not qualify to become a surrogate mother at this time. Period. What you are suggesting, if you could find a doctor to do it, would be a logistical nightmare.

First, the costs of going through two IVF retrievals and then the transfer would be very prohibitive. Who would pay for your treatment? Your cousin? Or you, who doesn’t need it? Are you willing to spend thousands of dollars out of your own pocket to get pregnant for your own child when you most likely can do it for free?

Next, what happens when the children are born? You’d have to wait for DNA testing to figure out which baby was your own.

Or worse, what happens if only one embryo takes? You’d have to wait for DNA testing after the baby was born to figure out who gets a baby and who does not. And again, who pays for all this? Say your child survived and your cousin’s did not. Does she pay the tens of thousands of dollars for surrogacy only to have you become a mother in the end?

And then there are the inherent risks of multiples. A lot can go wrong!

Which leads me back to the reasons why a woman who has never had her own children does not qualify to become a surrogate mother:

1. She runs the risk of losing her reproductive ability while helping someone else, causing her to never be able to have her own children. Not only must a woman have had her own children first to become a surrogate mother, she should be DONE having her own children, in case complications occur making it impossible for her to ever conceive again.

2. Especially in a situation like this with so much uncertainty, a woman who has never been pregnant and does not have her own children is not able to determine the emotions she will feel at birth.

3. A woman who has never had her own children has an unproven fertility history. She could have trouble conceiving, or simply be unable to conceive herself. Intended parents would spend tens of thousands of dollars to find this out.

No, this situation would absolutely not work. It would be expensive, and honestly, probably heartbreaking in the end. Wait until you have completed your family before becoming a surrogate for your cousin.