I am a single male who want’s to become a father, and I was wondering how old I have to be in order to start a surrogacy program and what are the costs?

Reply by Rayven
Ironically, surrogate mothers need to be 21+ but intended parents and the surrogate’s husband only need to be 18+. If you can afford it, you can do it.

As to the costs of surrogacy, they vary greatly from situation to situation:

Will the surrogacy take place locally, or are your state laws prohibitive with single-father surrogacy, so you must get a surrogate in another state?

Is your surrogate a close friend or family member who will not take a fee, or will you be looking for a first-time surrogate or an experienced surrogate?

Will the surrogate have health insurance, or will you be paying cash for all prenatal and delivery care?

Will the procedure take the first time, or take multiple tries?

Will there be multiples?

As you can see, it varies significantly. It could be as low as $20,000 for a local friend acting as a traditional surrogate, to upwards of $100K if you need an experienced gestational surrogate in another state and it takes a few tries, and you need to get an egg donor and there is bedrest and ….etc.

There are too many variables to give you any sort of exact price. Check out more pages on fees in the “Compensation” tab to your left.

I had a hospital birth, natural vaginal delivery for my son. I work in the medical field, so before I got pregnant and through most of my pregnancy, I assumed that a hospital birth with all the drugs available to mankind was the only way to go.

Then really late in my third trimester, I watched Ricki Lake’s documentary, “The Business of Being Born” – which made me question my assumptions about giving birth. Although I live in the SF Bay Area, I am not one of those crunchy granola women. I did do my best to avoid caffeine and artificial sweeteners during pregnancy, didn’t take any medications, and gave up my glass of wine with dinner.


If I had been so cautious about what went into my body during pregnancy, why would I suddenly give up all control when I was about to give birth? Although a home birth was not a consideration for me personally, I debated having a completely natural delivery, and didn’t make up my mind until after I got to the hospital, settled into the birthing suite, and talked to the anesthesiologist.

I was feeling pretty good about things, until about 5 hours into my contractions and the nurses had turned up the pitocin. I was no martyr; I wanted the epidural. Modern medicine is magical, and the rest of my labor was very comfortable.

About four hours later, my little guy was pushed into the world. I was a little surprised at how quickly I was kicked out of the birthing suite to be wheeled to a regular shared room. I was also shocked at how soon the hospital staff tried to separate me from my minutes-old baby; the only reason I got to keep holding him on the ride down was because he was nursing. And even after that, he was whisked away to the nursery for his “bath”; something odd happened that wasn’t really explained to me, and I didn’t get him back into my arms for nearly 4 hours.

Otherwise, it was a very happy experience. My doctors and nurses were all fabulous – kind, helpful, and patient. I would not change a thing.

Hello, I am 19 years old. And I went through menopause at 9 years old. I have always wanted to become a young mother and to go through the whole process of carrying a baby. I have a rare chromosome disorder called Turners mosaic Syndrome, and my ovaries are no longer usable. But I was told by my doctor that my uterus is perfect! I know a couple that has been trying to get pregnant for about 13 years now. And I want to help them. Am I too young?.


Reply by Rayven
Yes, you are too young. You MUST be 21 or older to become a surrogate mother in the United States, to legally enter into the surrogacy contract. Period.

With your medical issues, you might not qualify to become a surrogate mother, even if you have already found intended parents. When you are old enough, you will need to talk with their clinic to see if they would accept you. 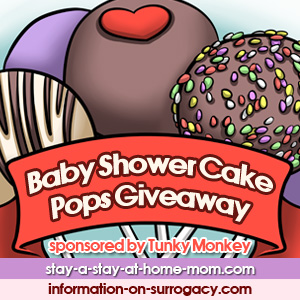 It’s time to celebrate baby with a fun treat for the baby shower: Tunky Monkey’s Cake Pops.  Winner will receive Pick your Treats for your Sweet Mother-to-Be, up to $100 in cake pops of winner’s choice, including shipping.

Here are the giveaway details:

I found out in my early 20’s that becoming pregnant was going to be difficult for me, and yet I still did not lose hope. I wish I could say my journey was easy, that there were not times that I wanted to give up and that it was no big deal. However, I can not say that.

After struggling with infertility for six years my first husband and I divorced, he wanted children and well we had done just about everything we could to become pregnant with no success. Once our divorce was final I moved from my home town to one of the larger cities in the states.

After many years of being single I met and married my current husband, I had always been upfront with him regarding my infertility and yet he wanted to marry me anyway. We were able to start treatments within a year of getting married, we started the process by doing injections and artificial insemination.


This was not an easy process, I had to give myself shots daily in my stomach and go to the doctor every other day. The hardest part was the fact that you could not get away from it, my entire life at the time, was scheduled around our treatments. It seemed to be all I could think about and do.

I had to sit out two months due to being overstimulated, then we started again, it was my third completed cycle. I was sure that like previous cycles this was a failure as well, I took a home pregnancy test and it was negative, I was testing early but you never know.

I became depressed and said the heck with it I am going to have a beer, I stopped at three. The next evening I went to dinner with my husband, I was famished and ate everything in sight, that is till they delivered my husbands steak. At which time I became ill and could not eat. I asked for my food to be boxed up and as soon as we got home I finished it off. That night while sleeping I wake up twice to go to the bathroom, again not something I do. The next day is Sunday and I am still four days away from needing to test, but I am sick yet again and decided to go for it.

To my surprise the test turned positive right away. I was filled with so many emotions, I was scared, nervous and did not believe it. So of course I tested again, it was still positive. The next day the doctors confirmed it with a blood test and I was on my way.

Two short weeks later I learned that I was not having a baby, but I was having three. I know have three healthy six year olds and would not change a thing.

If I were just starting down this road I would want a friend, someone I could speak with that would listen. As someone who has been there I would tell you to try not to let it be all you talk about, it will start to annoy people, to take breaks when needed and to never give up. I was told one day I would never have children, now I have three.