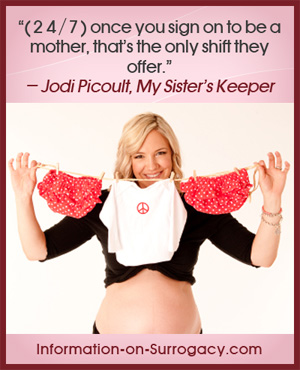 Making the decision to find a surrogate mother to carry your child is a huge decision. And the expenses that go along with that decision can be just as substantial. So…what exactly do the intended parents pay during a surrogacy?

Of course, pregnancy itself is a big expense. Then you add in the IVF treatments and the bill begins to grow substantially. However, that is not the end of the expenses that intended parents must be responsible for. Read on for a list of the most common expenses that fall to the intended parents.

Insurance
If the surrogate mother has insurance that does not cover pregnancies due to surrogacy or if they do not have health insurance at all, the intended parents should purchase a policy that will cover their health needs during the surrogacy.

Medical Expenses
Any medical expenses not covered by health insurance should be taken care of by the intended parents.

Clinic Fees
Any fees (including medications and testing) accrued from the IVF clinic during gestational surrogacies fall to the intended parents.


Attorney Fees
The intended parents are responsible for paying both their attorney and that of the surrogate mother as well as cover the costs of any legal fees associated with the actual birth.

Agency Fees
If the intended parents work with a surrogacy agency (as opposed to finding a match on their own), they are responsible for paying those fees.

Surrogate Fees
The intended parents are, of course, responsible for compensating the surrogate mother as outlined in their contractual agreement.

Miscellaneous Fees
There are also miscellaneous fees that may fall to the surrogate parent. Some examples of this are travel expenses, childcare costs, lost wages, prenatal vitamins, and visits to the doctor’s office. If the surrogate mother has to pay these, she should be reimbursed by the intended parents.

As you can see, being an intended parent comes with large expenses. This should be taken into consideration if you are thinking about pursuing surrogacy as an option.

Although every situation is different, it is safe to assume that a surrogacy can cost you anywhere between $50,000- $100,000. However, many people are deciding that having a child is worth the investment. 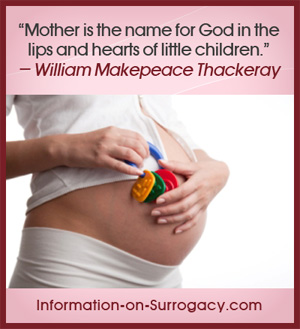 Hi there,
I’m having trouble finding a lawyer in California that specializes in surrogacy contracts. Can you point me in the right direction. Also, have you heard anything good or bad about surrogenesisusa.com?

At this time, the only surrogacy attorney I recommend practices in the southern part of the United States. Your best bet is to find more surrogates in your state and ask for recommendations.

As to the clinic, I have not had any personal experience with that particular clinic, but perhaps another viewer can comment.

The nice part about clinics is that one of the things they will do is assist you in finding a surrogacy lawyer in your area. 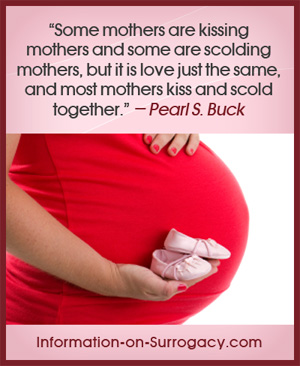 by ERICA E.
(MICHIGAN)
I AM INTERESTED IN BECOMING A SURROGATE MOTHER BUT I DON’T KNOW WHERE TO START! DO YOU LOOK FOR PEOPLE AND HOW? OR DO THEY LOOK FOR YOU. WHAT ARE SOME GOOD WEBSITE THAT CAN HELP ME AND HELP SOMEONE FIND ME. HOW DID YOU FIND THE PEOPLE?

You’ve come to the right place! This site, Information on Surrogacy, will help you with all the questions you have.

See the “Matching” section for information on finding intended parents.

You can either match independently (on your own) or through an agency. I have done both.

But first, before you start looking for intended parents, be sure you read through this site completely. You need to know if you want to do traditional or gestational surrogacy, you need to know what the qualifications and procedures are, and you and your partner will need to discuss compensation, insurance, and legal matters well in advance of finding a match.

Please see our six step guide to getting started: 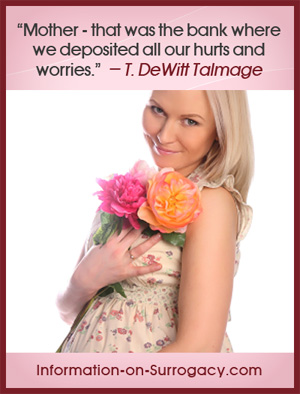 One question that a lot of people have about being a surrogate is whether surrogate mothers get paid for their services or if it is a purely benevolent act. The fact of the matter is that they are generally compensated; however this does not and should not take away from the fact that what they are doing is a great sacrifice and a huge gift to the child and the intended parents.

Surrogate mothers experience the same rollercoaster of emotions and physical consequences as other pregnant, but with extra, necessary steps that most other women will never have to go through.

First of all, before the surrogacy procedure can even be initiated, the surrogate must endure many invasive tests that require at least four months of injections (both on a daily and weekly basis) to make sure her body is ready for and able to sustain a pregnancy. Then, if a pregnancy does not occur, she has to do it all over again.

The appointments and procedures that are necessary may mean that she misses out on things that are important to her. She may have to use up vacation time from work, miss family events, and may even have to utilize childcare services for her own children in order to fulfill her surrogate duties.


It is not uncommon for surrogates to end up carrying multiples – twins, triplets, or even more than that. If this occurs, it is possible that she will be required to undergo bed rest for an extended period of time – week, sometimes even months. She may even have to undergo surgery in order to safely deliver the babies.

As you can see, a surrogate often has to put her entire life on hold for about a year in order to help the intended parents grow their family.

So why shouldn’t they be compensated? If you think about it, making these types of huge sacrifices would be very difficult if there were not some sort of compensation

This is not true.

While this may be the costs of the surrogate journey, most of that money will be handed over to the clinics that are responsible for all of the tests and the embryo transfer, to the surrogacy agencies who are responsible for arranging and maintaining the surrogate relationship , to the lawyers who make sure that all of the rules are followed, to cover the costs of medications and medical expenses to make sure the pregnancy occurs and is sustained. Only a portion of it is actually given to the surrogate to compensate her for her sacrifices.

In all honesty, sales representatives at the mall get paid more than a surrogate. But the great thing about it is that the money truly is not the main appeal of being a surrogate. These women do it all with the goal of bringing a life into this world that will be handed over to a family that has desperately wanted it. 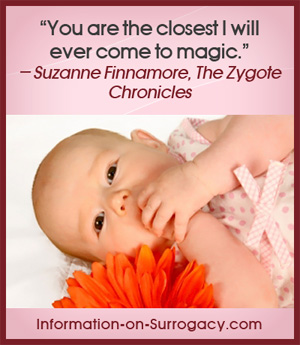 I just read another post in which you state that a surrogate declaring bankruptcy was a nightmare situation.

Would you care to elaborate a little on this subject??

I understand that an ideal surrogate needs to be financially stable – but bankruptcy does not ALWAYS mean that one is financially unstable. Sometimes bankruptcy is needed for a fresh start to overcome PAST troubles – and has no real bearing on CURRENT situations.

If a stable, supportive and as-stress-free-as-possible environment is what is surrounding a potential surrogate, I fail to see how financial status (minus being on government assistance, which I totally understand reasoning for) is any of anyone’s business.

Your insight on everything so far has been amazing… so I would appreciate you enlightening me!!!:)

I think you may have misread my previous post regarding State Funded Surrogacy. To my knowledge (and please, correct me if I’m wrong!) I have never mentioned any problems with surrogates who have declared bankruptcy.

In fact, I know SEVERAL surrogates who have had bankruptcies on their credit records.

I personally was never run through a credit check. I was never asked probing questions as to what my income level was, or if I had personally declared bankruptcy, though I was asked if I was on state assistance. Some surrogates do get a credit check, but most do not. Those that do, could easily explain away bankruptcy in the past. We are not talking about applying for an auto loan here; this is not a name less, faceless corporation, but a set of real people who may have had financial troubles in the past themselves.

The post I believe you were referring to was this one: https://www.information-on-surrogacy.com/why-do-agencies-require-a-serogate-to-not-be-on-goverment-assistance.html in which I stated that those who are doing surrogacy strictly for the money may run into a financial nightmare.

I agree with you wholeheartedly that a past bankruptcy should have no bearing on surrogacy. You shouldn’t have a problem whatsoever.